How to code scorpion spear? 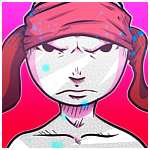 It looks really complicated, how would you do it?

4 answers to this question